Aurangabad is a city in the Aurangabad district of Maharashtra, India. Aurangabad (meaning "Built by the Throne") is named after the Mughal Emperor Aurangzeb. The city is a tourist hub, surrounded with many historical monuments, including the Ajanta Caves and Ellora Caves, which are UNESCO World Heritage Sites, as well as Bibi Ka Maqbara. The administrative headquarters of the Aurangabad Division or Marathwada region, Aurangabad is said to be a City of Gates and the strong presence of these can be felt as one drives through the city. Recently, Aurangabad has been declared as Tourism Capital of Maharashtra.It is also one of the fastest growing cities in the world

Aurangabad was founded in 1610 A.D. by Malik Ambar, the Prime Minister of Murtaza Nizam Shah of Ahmadnagar, on the site of a village called Khadki. He made it his capital and the men of his army raised their dwellings around it. Within a decade, Khadki grew into a populous and imposing city. Malik Ambar cherished strong love and ability for architecture. Aurangabad was Ambar's architectural achievement and creation. Malik Ambar died in 1626. He was succeeded by his son Fateh Khan, who changed the name of Khadki to Fatehnagar. With the capture of Daulatabad previously known as Devagiri by the imperial troops in 1633, the Nizam Shahi dominions, including Fatehnagar, came under the possession of the Moghals.

In 1653 when Prince Aurangzeb was not appointed the viceroy of the Deccan for the second time, he made Fatehnagar his capital and renamed it Aurangabad. Aurangabad is sometimes referred to as Khujista Bunyad by the Chroniclers of Aurangzeb's reign.

Bibi Ka Maqbara was built in 1660 by Aurangzeb's son, Azam Shah, as a loving tribute to his mother, Rabia-ul-Daurani alias Dilras Bano Begam. In 1756, Nizam-ul-Mulk Asif Jah, a distinguished General of Aurangzeb with the intention of founding his own dynasty in the Deccan, arrived at Aurangabad and made it his capital. He paid a visit to Delhi in 1723, but returned in 1824, Nizam Ali Khan Asaf Jah II transferred his capital from Aurangabad to Hyderabad in 1763. It was ceded by Ali Khan Asaf Jah II, Nizam of Hyderabad to Maratha Empire with Daulatabad and Solapur after Battle of Kharda in 1795 with paying indemnity of 30 million rupees. However, Marathi rule was lasted only 8 years and Nizam regained lost territories except Solapur with help of Arthur Wellesley, British general during Second Anglo-Maratha War.

Air
Aurangabad Airport is an airport serving the city and has connecting flights to Hyderabad, Delhi, Udaipur, Mumbai, Jaipur, Pune, Nagpur. Recently flights were made available to the people travelling to the Hajj pilgrimage.

Rail
See also: Hyderabad-Godavari Valley Railways
Aurangabad (station code:AWB) is a station located on the Secunderabad-Manmad section of the Nanded Division of South Central Railway zone of the Indian Railways. Aurangabad has rail connectivity with Mumbai, Delhi, Hyderabad. It is also connected to Nanded, Parli, Nagpur, Nizamabad, Nasik, Pune, Kurnool, Renigunta, Erode, Madurai, Bhopal, Gwalior, Vadodra, Narsapur. But there is still a demand for direct rail connectivity to other major cities of India. The Aurangabad Jan Shatabdi Express is the fastest train connecting it with Mumbai.

Aurangabad is well connected by roads with various major cities of Maharashtra and other states. National Highway 211 from Dhule to Solapur passes through the city. Aurangabad has road connectivity to Jalna, Pune, Ahmednagar, Nagpur, Beed, Mumbai and the route is currently being upgraded into four lane road of National Highway standard. A new Nagpur-Aurangabad-Mumbai express highway is also being developed. 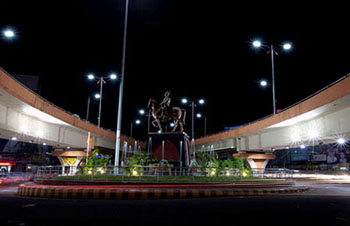